It’s not much (especially when I was holding myself back because of the prices) but here’s a post on the spoils I got during my trip in Japan.

*Note: I will make reviews for these figures in the future.

Got him for about 2,160 yen @ 📍Kbooks, a fair price especially when I couldn’t find him elsewhere.

He’s a prize figure and is supposed to be placed on top of your noodles to stop the lid from popping up when steam comes up. Though most PVC figures don’t handle heat too well so I’m just going to display him.

He also comes with a sword to be placed in front of him.

He’s also a prize figure. Usually most EXQ figures are prizes in UFO catches at Sega game centres/arcades. If you put him together with the base he stands almost as tall as a 1/8 scaled figure. Kinda wished I got Gawain’s EXQ figure as well.

He’s also got legs for days.

I got it for the suggested retail price. I think Volks Hobby Paradise asked for either the same price or something a little higher in price.

Nendoroid dolls are basically cu-poche dolls, you can dress them up in doll clothes (hand-made or store bought) and attach different heads and hands. archtype Boy doesn’t come with a head so you could buy it separately or put on the head of your fav nendoroid boy on it and play dress up (though because of the skin tone of my doll, I can’t put a temporary head on it just yet).

I won’t exactly do a review of this one…yet.

Not exactly a DJ’s turntable but it does help display some of your favourite figures and nendoroids. Been meaning to get one just to use it in a display cabinet one day (which I eventually got after the trip when I saw Ikea discounted their display cabinet lol). It has a permanent small plate of 80mm in diameter (not big enough for my nendoroid stand for Ieyasu 😔) and a bigger plate of 120mm in diameter more suitable for medium sized figures and other objects.

I got it for 1,400 yen @ 📍Volks Hobby Paradise. I actually wanted one from amiami as I know their prices are cheaper but the store I went to didn’t seem to have one in stock (I didn’t even know there was another store in Akihabara so I never checked the other one). Looking at amiami’s online store it seems like the wanted wasn’t there anymore but there is this one that has a reflective surface, can change the direction of rotation and almost has the same diameter as the big plate on the turntable I’ve got.

It takes on one AA battery and can be a little noisy sometimes. The sound of the cogs turning at the base of it is kinda noticeable in a silent room. But it still does a good job of rotating your figures. I’m unsure if you can change which way it rotates as there is only an on and off button. It also comes in a white colour (I spent a good 10 minutes or so trying to decide which colour would be best in a display cabinet and I still left wondering if it was a good idea to choose the black one 😆)

The smaller haul includes keychains, a shrine charm and a badge.
The shrine charm is from Ueno Park Shrine, the design is an embroided camellia and is supposed to be my birth month’s flower according to the shrine. There was a sign showing that each flower had a meaning, though I forgot what mine was 😂 Most of them had to do with love though. The rabbit bell key charm came from Nijo Castle in Kyoto.

First up my Cu Chulainn key charms. Been in love with this dog boyo since watching Fate/Stay Night: Unlimited Blade Works. He gets a lot of shit because he keeps dying in almost every route that it has become an ongoing gag in other series, but he’s pretty cool. Though these charms ain’t cheap considering they’re around 800 yen each, the same price as my Gil figure 😂 But when I saw Gudaguda styled Cu with his spear pierced through his chest I knew I had to get it (and Alter Cu, the charm on the left, is pretty hot 😩). The badge is also a Cu variant, Caster Cu. So I got almost one merch for every Cu (except for prototype Cu).

This acrylic charm I got from a blind box. I spent a good while feeling out every other packet trying to guess which one was the Cu charm but turns out I got yorokobe shounen’d by Kirei here.

Funny thing is, he’s supposed to be the bonus/secret acrylic charm from the blind box. So I got lucky…. I guess?

Despite no longer being a fan of Enstars, I could never pass the opportunity to get a bkub illustrated ADONIS FANTASY key charm. It was a second hand charm but thankfully it wasn’t too expensive, about 400 yen (100 yen more than a 300 yen gacha key charm).

The racing Miku charm I got from the gachapon outside of the pop up store because I’m too cheap. According to the mini pamphlet from inside the gacha ball this Miku is the 2017 Racing Miku design. I also noticed that because parts of the charm was semi-transparent light can go through it. I don’t know if illuminating the charm makes it cursed or blessed looking but it’s pretty neat.

Got this babby sized Godzilla key charm at the Godzilla pop-up store in Ikebukuro station.

He’s design like a maneki-neko (beckoning cat) and apparently his head bobbles (but not that much).

The characters on his gold coin says 豪運, though not exactly sure how that translates (the last character usually means luck but the first one I haven’t seen before)

Got Sakyo from an A3 gachapon outside of SEGA GiGO Ikebukuro. Considering half of the key charms in the gachapon where characters from my fav troupe (autumn troupe represent) I felt good about my odds.

This little pikachu figure? was from a Pokemon Lets Go! themed gachapon. I think there were some Eevee ones as well inside the gachapon and most of them had hats or other apparel on. Apparently their main use is to place it on the edge of your cup so they can hang around while you drink? or something like that. Though I tried to put it on my glass and it just wouldn’t stay on it. Eventually I put it on my keyboard with blu tack (as seen in the picture above) and even then it still fell off, so now sometimes it rests on my escape key but usually falls off as well 😂 Why can’t you stay put, pikachu.

I only got one because I was too picky with the prices and I didn’t know the best places to go to for otome games. It’s a preowned limited edition of Vairable Barricade at the price of 4,580 yen–but I was fooled, turns out that’s the price before tax. It was actually 4,900+ yen. I saw the same limited edition at another place being sold for maybe 5,000+ yen so I thought it was a good deal.

Then I realised why it was so cheap.

So the booklet was nothing but short stories galore plus a very rough two page illustration.

Honest to say it was a disappointing limited edition, especially when it is Otomate’s last PS Vita game… I should’ve just bought the normal edition.

That’s all for my Japan trip haul. It’s not much but I think I found some bargains when it came to a few figures. Funny thing is I still have a good amount of Japanese money with me right now so I guess I’ll just save them for the next trip. 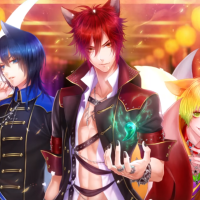